The anterior cruciate ligament is of particular importance in the knee joint - it enables a hinged movement of the joint and prevents the bony structures from "slipping" back and forth. Torn cruciate ligament is still one of the most common orthopaedic diseases in dogs.

The diagnosis cruciate ligament rupture is a typical sports injury in humans. With our four-legged friends it behaves somewhat differently. In addition to the traumatic causes, it is usually a "degenerative process", i.e. the cruciate ligament shows signs of wear over the years, becomes thinner and thinner and finally tears. The changes in the ligament structure increase with age and with increasing body weight of the dog (negative effects are also caused by poor training).

The final tear of the cruciate ligament usually causes only slight to moderate pain. Although many dogs initially do not put any weight on the affected leg at all, an apparent improvement occurs within 2 to 3 weeks - the dogs sometimes put weight on the leg again until suddenly there is another deterioration: this is often the moment when the inner meniscus is massively damaged (a kind of "shock buffer" between the bony parts of the joint).

The instability of the joint causes the dog enormous problems, with every load the bones shift against each other - the dog feels insecure. Over time, the situation is made worse by the first signs of arthrosis or a painful joint effusion.

In most cases, cruciate ligament rupture is diagnosed during the clinical orthopaedic examination - namely in cases where the joint is so unstable that the upper and lower leg are abnormally displaceable against each other (positive "drawer and tibia compression test"). In unclear cases (e.g. strong connective tissue reactions in the joint, partial tears of the anterior cruciate ligament), the diagnosis is confirmed with the help of imaging procedures (X-ray, CT). 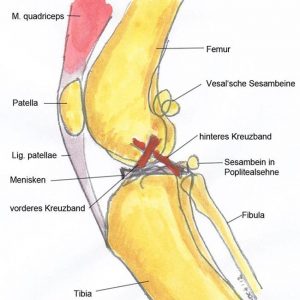 A torn cruciate ligament does not heal on its own - the therapy is therefore always a surgical intervention and is best carried out as quickly as possible in order to prevent or minimise chronic consequential damage to the joint, such as arthroses, cartilage/meniscus damage and atrophy of the limb muscles.

Only in very small dogs with "partial tears" of the cruciate ligament is conservative treatment (strict immobilization, anti-inflammatory drugs, long-term physiotherapy) an option.

The path of the many surgical methods developed for cruciate ligament rupture led via intracapsular and extracapsular techniques to modern repositioning osteotomies. Common to all of them is the evaluation and, if necessary, treatment of the menisci (cleaning up, meniscectomy, etc.) and, as a decisive measure, the stabilization of the knee joint. A distinction is made between intra- or extra-articular techniques and those with or without ligament replacement. In our small animal centre the following surgical methods are mainly used:

The choice of the surgical method depends on the physical conditions of the patient (for heavier patients, methods 1&2 are often not recommended), the degree of arthrosis of the joint, the involvement of the menisci and is ultimately a question of cost. This means for you as the patient's owner that we will determine the right way together in the consultation.

In order to give you a comprehensive overview of all essential surgical methods of cruciate ligament rupture in small animals (dog / cat), you will find here a small overview with the respective advantages and disadvantages from our point of view:

In this surgical method of cruciate ligament rupture, a quarter-circular bone incision is made at the upper end of the tibia. The joint surface of the tibia is then rotated backwards according to a previously calculated measure. It is fixed in this new position with a bone plate and screws. The rotation reduces the tilt of the joint surface. The goal is a postoperative inclination of 5°.

The angle between the patellar ligament and the joint surface is then about 90°. Experiments have shown that with this inclination the cranial tibial thrust is neutralized and the tension of the anterior cruciate ligament (if it is not yet completely torn) is significantly reduced.

✓ Permanent and reliable stabilisation of the knee joint even under heavy load, even in animals with a high body weight

A method similar to TPLO is the TTA (Tuberositas Tibia Advancement). Here, the rupture of the cruciate ligament is also used to modify the biomechanics of the knee joint by means of a bone incision. As in TPLO, a forward displacement of the patellar ligament results in an almost right angle between the patellar ligament and the tibial joint surface, as in TPLO.

✓ Immediately postoperatively, the load on the operated leg is somewhat faster than after TPLO

An extensive comparison between both surgical methods TPLO & TTA can be found in the dissertation of Dr. Monika Höpfl here.

X Replacement ligament can tear again in the same way as a normal cruciate ligament
X "wearing out" (osteolysis) of the bone drill holes in the Tigthropic method, resulting in renewed instability

This method has been used on humans for 25 years. The body's own or artificial material (tendons, parts of the patellar ligament, fascia) is used as a ligament replacement instead of the torn cruciate ligament.

This method had not proved itself with the dog for a long time. Due to the insufficiently controllable strain on the knee joints after surgery in dogs, the ligament replacement tore again in many cases.

With the development of new materials in medical technology, it is now possible to offer dogs / cats a surgical method that is considered state of the art in humans because it best mimics the natural anatomy of the animal and, unlike TPLO / TTA, does not involve any stressful changes to the bones.

A tunnel technique is used to insert the Zlig as a total replacement for the cruciate ligament. The braided extra-articular parts of the ligaments are anchored in femoral and tibial bone tunnels by canulated titanium interference screws.

This technique does not cause irreversible damage.

Advantages:
✓ can also be used in very heavy dogs >70kg
✓ reproduction of the natural anatomy without serious intervention in the bone structure
✓ the patient's hind leg can be loaded again immediately (!) after the operation without any risks
✓ lower costs than with TPLO or TTA
✓ especially in young animals, this method does not obstruct the later use of Zlig or TPLO / TTA again - the latter, on the other hand, are unique and final

Disadvantage:
X higher costs than with capsule fascia tightening according to Meutsteg or lateral thread tension

You can find more information on our special Zlig page.